This site has been moved to raunakhede.com

Here’s a simple circuit which you can use to charge any device that uses a USB charger. (Smartphones, Tablets, Portable music players, etc.)

The components were purchased from J.M.P. Dias, Panjim.

Assembly of parts was done as shown below:

The 9 volt battery is connected to the battery snap. Such batteries cannot be used to charge any device directly (because the device will blow), so an IC is used to reduce the voltage to 5 volts. The power now goes to the USB connector, from where any USB charger cord can be plugged in.

Click on the picture below to see a video of the Portable Smartphone Charger:

This summer, I did my first internship with Inventrom, an electronic technology start-up based in Goa with primary focus on Robotics and Wireless devices.

Had a  supercallifragilisticexpialidocius summer working there!

A million thanks to team Inventrom for making my summer holiday a memorable one.

Some memorable moments which I will never forget were, making the marvelous mistake of going to work on innumerable Saturdays when Inventrom is a 5 day week workplace, (That’s how much I enjoyed working there! A pity they weren’t open on Sundays!) and playing darts next to a picture of Dart Vader. (A dramatic little spark would appear if the darts missed the board, bounced off the door and hit the floor!)

However, the really hard work was hogging on scrumptious food with the team, like:

And last but not the least, we played cricket in the evenings! TI (Team Inventrom) vs. EEL (Everyone Else in the Locality)

Once again, thank you Inventrom. I enjoyed being a member of your team and look forward to working with you all again, not in the future, but reeeeeally soon.

I was asked what robotics meant to me. This was my answer:

Many people consider robotics to be a field in engineering. Others consider it to be a hobby. I think of it as a game. A game which you not only play, but also create and refine as you go along. Your robot is your player and the task for it to accomplish is the game level. As you improvise on your robot to accomplish bigger and more advanced tasks, you gain experience and knowledge. The game never stops. It only pauses. The levels are unlimited, and so is the fun! 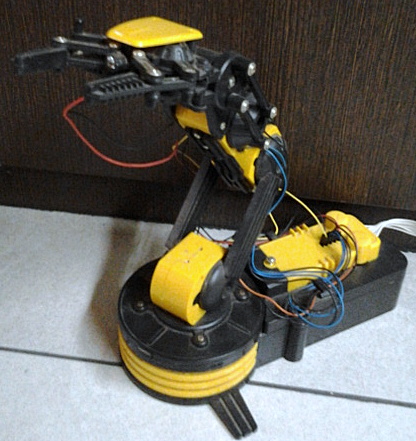 This is a mouse controlled signboard made using Raspberry Pi (the world’s smallest computer) and a new circuit board called Topping Pi (designed and manufactured by Inventrom Robotics, Goa). The program was written in Scratch GPIO 5. A simple programming language, yet amazing in capabilities!

Click on the picture to see a video of the awesome signboard and an even more awesome ME!

This is one of my latest projects using  Snap Circuits Pro.

This is a simple circuit which sets off an alarm when it detects a full tank. (In this case, a basin full of water.)

Assembly of parts was done as shown here.

The two jumper wires act as electrodes and are placed at a level in the tank, beyond which no more water can be filled. The alarm is set off when the water reaches the level of the electrodes, which is also the tank’s maximum capacity.

Click here to see a video of the Full Tank Alarm in action.

This little guy is a bit bigger than your fist and has two legs on either side. It can either plod along or do the ducky walk. The battery pack is mounted on top of it.

To see the crawler doing the ducky walk, click here.